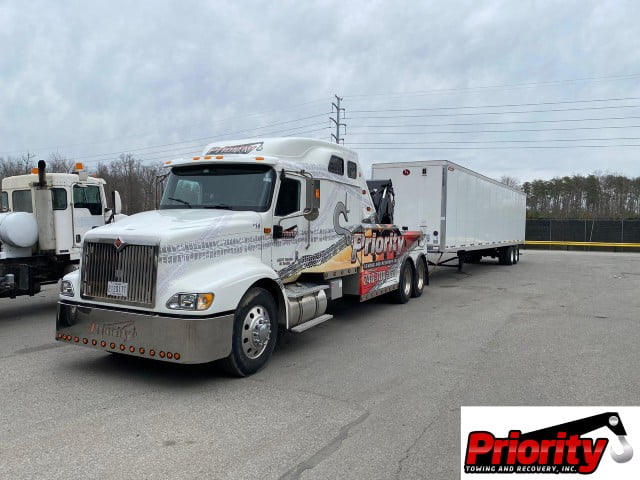 The heavy tow truck team at Priority Towing completed a tow from Monrovia to Waldorf, MD. A trailer had received extensive damage after being rear-ended in an accident and was ruled a total loss. The trailer owner’s insurance company requested that the trailer be towed to a scrapyard. The scrapyard would then break it down and sell it for parts.

While it is sad that the trailer can no longer be used, knowing that it’s parts will be re-used and recycled is a positive thing! The heavy tow truck team headed to the car depot where the trailer was being stored. Their initial assessment surprised them. Someone had completely cut off the trailer’s emergency gladhand!

A gladhand is a coupling device which connects a trailer’s supply and service lines to a tractor or a truck. With the gladhand missing, the towing team needed a new plan. They backed up their heavy wrecker to the front of the empty trailer. Using their wheel lift, they accessed the front axle of the trailer.

After hooking onto the trailer using tow chains, the heavy towing team was ready to hit the road! The drive to Waldorf went smoothly and the trailer was delivered to the scrapyard with no hiccups.

Great work out there team!

The car depot was located in Monrovia, MD. The heavy tow team got on the I-70 W from MD-94 N. The heavy towing team then followed I-70 W to MD-75 S/Green Valley Rd in New Market. Taking exit 62, the Maryland tow truck team exited I-70 W and followed MD-75 S until they reached Monrovia.

Once at the car depot, the heavy towing team assessed the situation. The heavy tow truck noticed that the gladhand was cut off the trailer! A gladhand is a coupling device which connects the supply line of a trailer to a tractor.