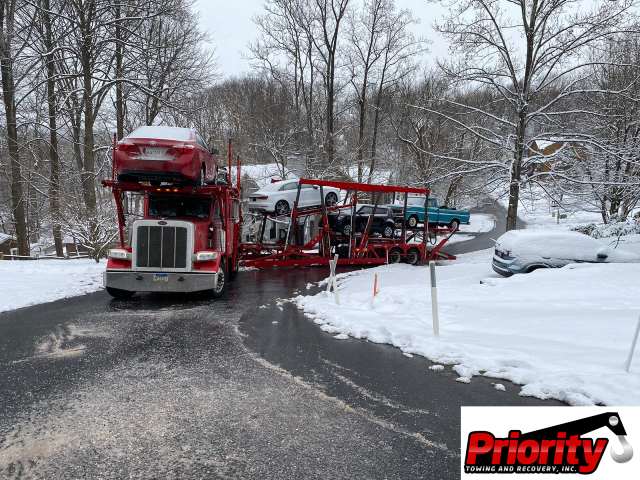 A mobile diesel mechanic was the hero of the day after an emergency repair in Lake Linganore. Priority Towing originally received a phone call for a semi tow team. A car carrier was delivering a vehicle in the area. As the truck was making its way up a 15 degree incline hill, the rear tires on the passenger side slid off the road.

It was immediately clear that the truck did not have enough traction to continue up the hill and around the curve. As snow continued to fall from the sky, the truck driver called in for reinforcement. Priority Towing Service dispatched their semi tow team.

Due to the incline of the hill and the awkward angle the truck found itself in, the team took their time with the intricate rigging process. With everything in place, the semi tow team used their winch to pull the rear wheels of the truck back onto the road.

End of story, right? Actually, this is when things got interesting! With the freezing temperatures and steep incline, the truck driver didn’t feel comfortable continuing uphill from his current position. He wanted to back his truck down the hill and then take a running start in order to build enough momentum to easily clear the hill.

He made it down the hill easily enough. However as he put his truck back in gear to drive up the hill, he blew his drive shaft! Unfortunately, the truck was now in such an awkward location that it was impossible to tow!

The semi tow team immediately called for their Mobile Diesel Mechanic division to see if they would be able to perform the necessary repairs right there on the snowy road. Many mechanics would have refused but Priority Towing’s team is made of tough stuff! The mobile diesel mechanic was able to repair the truck and it was back on the road within hours!

Fantastic work out there!