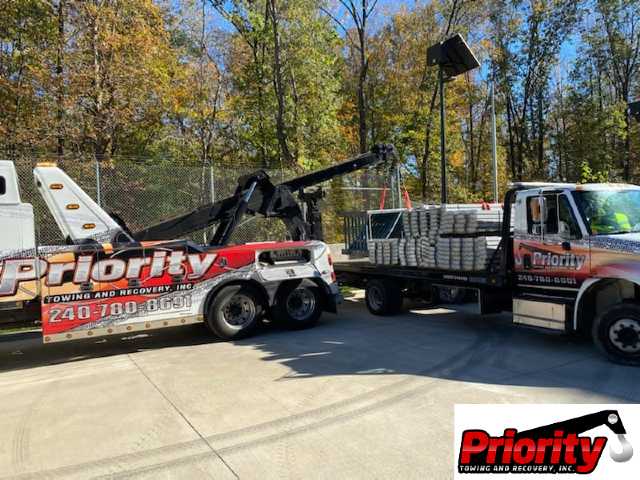 Priority Towing had to apply for vendor status and receive special permission and passes to go on base. Once those were secured, the heavy towing team were able to tackle the tough job ahead of them. Metal scaffolding had been delivered to the wrong area of the military base. While this may not seem like such a big deal, there was a full day’s worth of problem solving ahead of the Priority team!

In a nutshell, they needed to lift the scaffolding onto their flatbed, deliver it to the proper location on base 4 miles away, and offload the scaffolding. The scaffolding was laid out on the ground haphazardly and packed into 6 units, each with different weights, shapes, and center of gravities. To make things even more challenging, the heavy towing team had a very narrow workspace to work in.

Thankfully, the Priority Towing team excels in difficult situations! They carefully calculated the center of gravity for each unit of scaffolding parts. They also formulated individual plans for lifting the units; some units were able to be lifted with straps, others had to be lifted using chain binders and long chains. It really was a real life game of building blocks!

With a good work ethic, heavy towing expertise, and the right machinery, Priority was able to get the scaffolding to the correct location on base. Great work out there team!