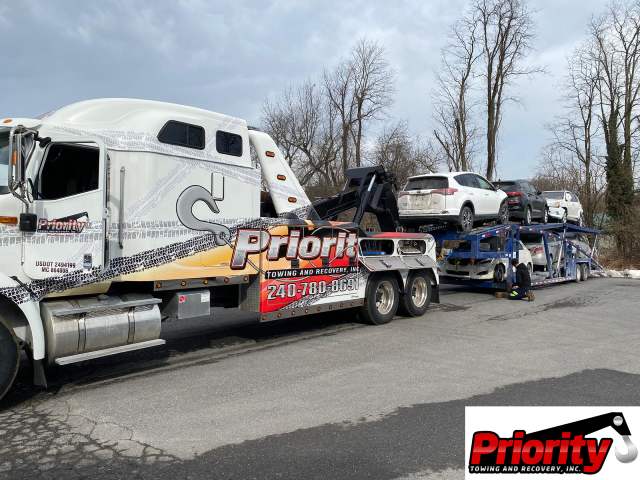 Car Carrier Towing After Engine Failure on I-70

Priority Towing performed a car carrier towing operation on I-70 near Mount Airy, MD. A Dodge  4500 was hauling a loaded car carrier trailer down the highway when it suddenly broke down. The driver thought it was a simple starter issue and called Priority Towing’s mobile diesel repair team.

They immediately dispatched a mobile diesel mechanic to the client’s location. After his initial assessment, it was clear to the mechanic that this would not be a simple fix. He diagnosed a major engine failure on the pickup truck. It was safe to say at this point that the pickup truck would not be completing its trip anytime soon.

The mobile diesel mechanic called in a light duty tow truck to tow the Dodge 4500 to a nearby dealership. Should they have left the car carrier on the side of I-70, the state police would have impounded it. After discussing options with the driver, Priority Towing offered to store the car carrier trailer in one of their secure yards.

Details of Car Carrier Towing After Engine Failure on I-70

The Priority Towing team answered a call for a mobile diesel mechanic (not a car carrier towing team). A driver of a Dodge 4500 was transporting a fully loaded car carrier down I-70 in Mount Airy, MD. As he was driving, the pickup truck unexpectedly broke down. The driver did not request a heavy towing service, as he believed that a mobile diesel mechanic could solve the issue.