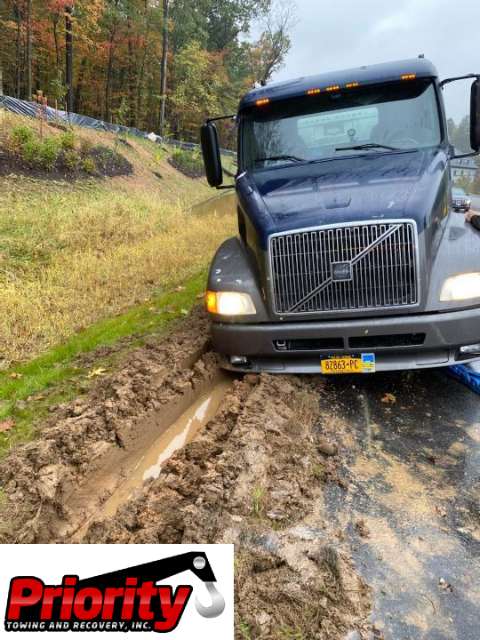 A truck driver in need of a semi tow reached out to Priority Towing when he got himself into quite the muddy mess. The driver was towing a car carrier trailer down the MD-32 when his phone kept ringing. He would normally answer using his bluetooth headset but it’s batteries were completely drained. Once he realized it was his business partner calling, he decided to pull over to the side of the road to answer the call. Little did he know that this would be one of the most expensive business calls of his life!

The road he pulled into had just been landscaped over the past week. Combined with the heavy rain in the area, the ground was extremely soft! A car would have had difficulty driving in that muddy mess so you can imagine what happened to a car carrier loaded with one vehicle on it’s trailer! The entire right side of the truck immediately sank into a muddy grave. When the semi tow team arrived on scene, the truck had sunk so low that every axle on the right side of the truck was now resting on the asphalt!

The Priority team is well reversed in heavy duty winching. They ran the winch down to the front axle of the tractor and angled the lift so that it was lifting both upwards and forwards at the same time. They managed to successfully get the tractor back on the asphalt, however, their job wasn’t done! The truck driver got back into his tractor but the wheels were so caked with mud, he couldn’t get his truck moving. Priority then repositioned their own truck and winched the tractor and all 53 feet of trailer out of the mud! It took 30 minutes of winching but in the end it was all worth it!

Fantastic work out there team!