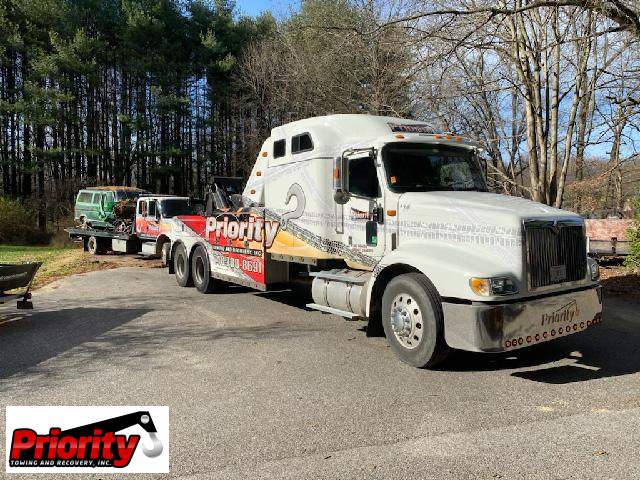 A towing service company was called in to move an abandoned van from a family’s backyard. The Ford 1 ton van had belonged to the home owners’ son. When he was done using it, he parked it in the woods behind his parents house. The abandoned van needed to be moved when the house was put up for sale … 28 years later!

With almost three decades of sitting in the same place, nature had really taken over the van. There was growth absolutely everywhere! The vehicle itself was 200 yards behind the house, parked in a wooded area. In order to get to the abandoned van, the towing team would need to cross the yard, go around a retaining wall, a septic field, and numerous trees! To add an extra level of difficulty, heavy rains had caused the ground to be extremely soggy!

The towing service team came up with an ingenious solution to avoid extensively damaging the lawn and still be able to recuperate the fan. They first used a skid steer with a forklift attachment to lift up the truck and bring it out of the woods and into the backyard. Unfortunately, due to how soft the ground was, the skidsteer would be unable to clear the remaining 180 yards with the heavy van.

With the van now in the backyard, the towing service team noted that it was stuck in park; they were unable to put it into neutral. To recap, at this point they have an abandoned van 180 yards away from them on some of the softest, soggiest grass you could imagine! The team then backed in a flatbed truck towards the van, fully knowing that the truck would not be able to get back out due to the soggy lawn. Once they loaded the van onto the flatbed, they drove it as far as they could and then winched it out the remainder of the way!

This ingenious solution not only caused as little damage to the lawn as possible, but got the job done in a seriously tricky situation! Fantastic work out there!

Details of Towing Service Called In To Move Abandoned Van